"Courage is not simply one of the virtues, but the form of every virtue at the testing point."

Email ThisBlogThis!Share to TwitterShare to FacebookShare to Pinterest
Labels: Quotes

Recently, I snapped a whole bunch of pictures of Abby's artwork so that I could throw away the multitude of loose-leaf paper littering my house. (Oh, the freedom!)

Here is one of my absolute favorites from this year. 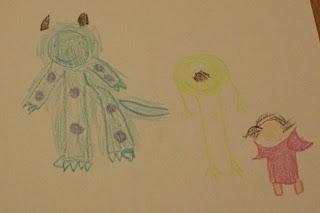 Light the Night with Thanks 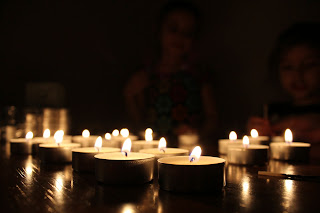 On Wednesday night before Thanksgiving, we had our missionary-friends, Tomasz and Miriam, over for a mini-Thanksgiving party. While they were here, we decided to do a cool activity called "Light the Night with Thanks."

My mom developed this wonderful tradition a few years ago and it has been a big hit with her family for several Thanksgivings in a row. This year, we decided to try it with our girls. It was great to have Tomasz and Miriam join us too!

Here's how it works. You start with a dark room, lots of tea candles, and a pack of matches or a lighter.

(You also need a wonderful photographer who can turn out good pictures in very low lighting. In this case--Joshua!) 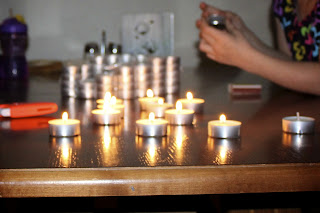 Then you need to grab some grateful people to be thankful with you. :)


Each person takes turns expressing thanks for the first category: "A person outside your family for whom you are thankful." While sharing, they light a tea candle.

Another category was "Something the Lord has taught you."

By now the room was growing quite bright! And so were our hearts. 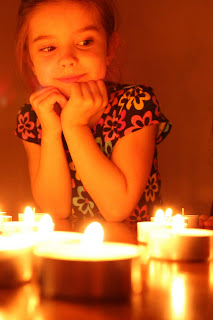 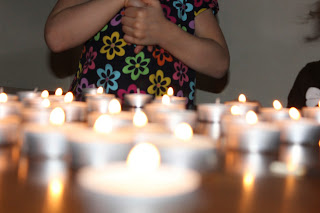 At the end, we closed in prayer, thanking God for all the blessings we had been talking about. (You can also choose to pray after each individual category.)

We enjoyed some fellowship, play time, and yummy apple strudel made by Miriam. Hannah had lots of fun with our latest-greatest new toy: a ball popper! 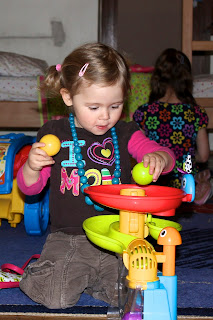 [If you're interested in seeing pictures from our Thanksgiving Day celebration, Joshua has an album you can view here.]
Posted by Kelsie Steele at 8:23 PM No comments:

These thoughts were a blessing to me on several bleary-eyed mornings this week when I was especially tempted to complain or have a pity party. I wanted to post this on Thanksgiving, but due to a little girl getting very sick, several sleepless nights, and in general being behind, it didn't happen. 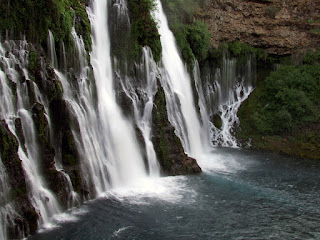 The Holy Spirit is shed abundantly over me. (Titus 3:5-6)

I am completely free from sin's power. (Romans 6)

I am chastened as a beloved son. (Hebrews 12)

He did it because He is so, very gracious.


“For ye know the grace of our Lord Jesus Christ, that, though he was rich, yet for your sakes he became poor, that ye through his poverty might be rich.” (2 Corinthians 8:9)

Email ThisBlogThis!Share to TwitterShare to FacebookShare to Pinterest
Labels: Drawing Nigh to God

A Wooly Blue Sweater and Some Thanksgiving Perspective 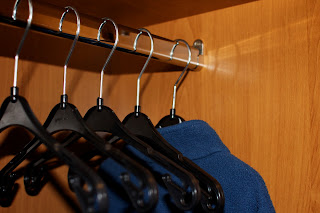 One thing I have repeatedly encountered in Ukraine is the feeling that I have so. very. much. This is despite the fact that I am without many things that are considered by American standards to be necessities.

The other day I was leaving our building to run a quick errand. At the entrance to our apartment we have a guard booth where one of 3 elderly ladies sits on watch all day. In general, they help with checking on who’s going in and out of the building, calling the hotline for elevator repair (this happens frequently), passing along our mail, and so on.

The lady who was on guard that particular day was named Raya. (Ri-ya) As I passed I noticed that she had on a dark blue sweater. Nothing unusual there. But then I realized something.

It was the same blue sweater she had on last time. And the time before that. In fact, I’m not sure I’ve ever seen her wear anything else.

That’s most likely all she has. Or the best of what she has.

Now, just recently I’ve been lamenting the state of my wardrobe. I’ve been out on several fruitless searches in thrift stores and clothes shops, seeking shining replacements for the uninteresting, nondescript items that are currently hanging at home.

But as Raya’s wooly blue sweater flashed before my mind’s eye, I realized that compared with her meager pickings, my wardrobe seems like a king’s closet.

I find myself complaining because I cannot fit all of our things neatly into our 750 sq. foot, 4-room apartment. But most of my Ukrainian friends live in only one room, flanked by a tiny kitchen and an even smaller bathroom. Those who are a little better off have 2 whole rooms in which to raise their family.

I may sigh inwardly about my well-used, mismatched furniture. But many of my friends don’t have any furniture at all, or what they do have doesn’t belong to them. It belongs to their landlord.

There is an elderly gentleman living in our building who regularly makes trips to the dumpsters to hunt for recyclable glass and cardboard. If we get a cardboard box, we set it out on the step for him. If he turns it in he can get a few “kopecs” (pennies) for it. This helps to subsidize his pension and put bread on the table.

I, on the other hand, have kopecs rolling around in drawers, coming out of pockets, and stacking up on dressers. What buys his bread is merely extra clutter at my house.

I’ve complained before because I can’t find whole wheat flour, purchase cranberry juice, or buy organically from the health food store. “If I were in America it would be so much easier to feed my family.” But while I eat heartily every day, most of the rest of the world struggles to eat at all, much less healthfully. And much of the rest of the world doesn’t have drinking water, either.

The point of this post is not to make us all feel bad on account of what we have. Nor is it to point out that we should be thankful because, after all, there is always someone worse off than we are.

The bottom line is that thankfulness is a matter of perspective. It has nothing to do with how much or how little one has. It has to do with whether your focus is on what you do have, or on what you don't. If we aren't thankful for what we have right now, we won't be thankful if we possess the moon.

So, is your glass half-empty, or half-full? I feel like mine’s running over.

I’ll keep looking for those shining wardrobe replacements. God has blessed me with more than a few kopecs to spend on them. And when I find them, I hope I’ll remember to say, “Thank you!”
Posted by Kelsie Steele at 9:54 AM 3 comments:

Email ThisBlogThis!Share to TwitterShare to FacebookShare to Pinterest
Labels: Drawing Nigh to God 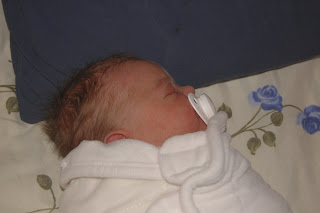 From the very first moments, she lit up our lives. 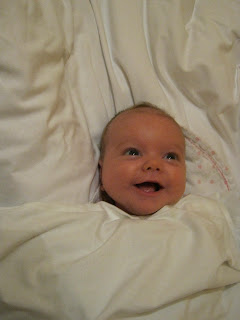 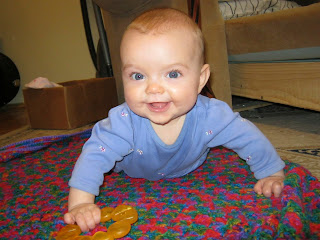 We played and enjoyed each day. 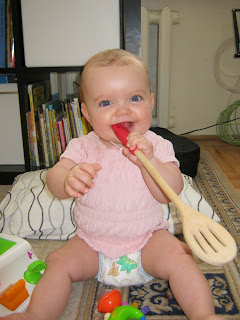 Now she is a big one-year old. 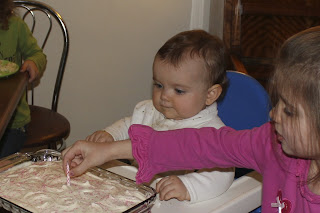 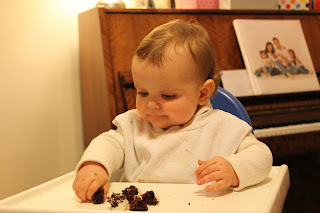 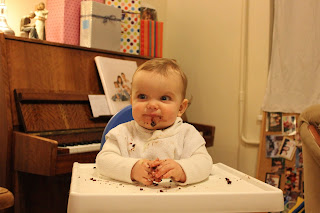 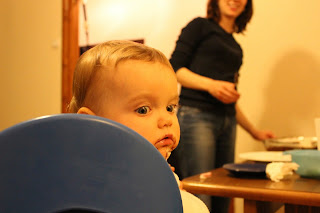 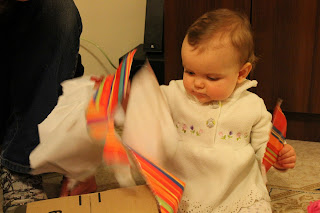 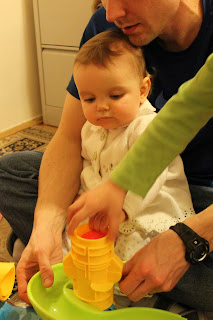 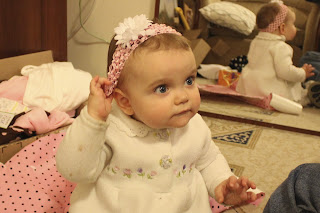 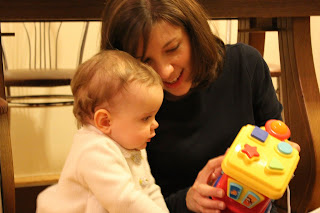 We all love you, Hosanna! Happy Birthday! 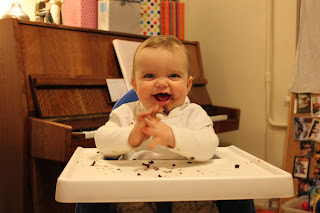 Here is a video taken about a week before Hosanna's birthday that gives a glimpse of the fun she brings to our lives everyday. (I apologize for the doleful background music. It's coming from a BBC Human Planet video we had playing.)

Feed the Hammer to Daddy from Joshua Steele on Vimeo.

Posted by Kelsie Steele at 4:02 PM No comments:

[ If you didn't see the first post about Austria, you can view it here. ]

Austria: breathtaking scenery, coffee and pastries, quaint towns, beautiful music, history and romance. What's not to love? This was an incredible place to spend our 7th anniversary. My man scored big!

But the best part... 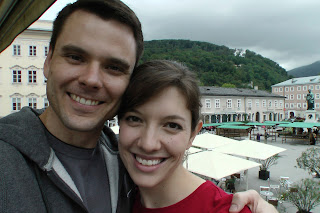 ...was just being together.

Now, for the long-awaited pictures. (In order to turn on the captions, enlarge to full screen view and then click on the middle of the picture.) Enjoy the show!

Email ThisBlogThis!Share to TwitterShare to FacebookShare to Pinterest
Labels: Family and Friends, Marriage and Mothering

Winters here in Ukraine can get pretty bleak, so I am basking in this while I have it!

It's been a beautiful fall. Thank you, God!

Email ThisBlogThis!Share to TwitterShare to FacebookShare to Pinterest
Labels: Interests

Joshua just posted Life is Colorful over at our ministry blog site. It contains a detailed family & ministry update, complete with some great pictures. Check it out here!
Posted by Kelsie Steele at 10:10 AM No comments:

Email ThisBlogThis!Share to TwitterShare to FacebookShare to Pinterest
Labels: Family and Friends, Our Ministry in Ukraine

Recently, at her Ukrainian preschool, Abby was given some rhymes to learn for the children's fall presentation. She had them down pat in about 3 days, and was all ready to recite when....

I had planned to record her saying her lines at her school presentation, but since she had to miss it, we decided to record them at home instead.

In case you don't understand Ukrainian, ;) the first rhyme talks about how beautiful autumn is and how much everyone loves it. Rhyme #2 describes different types of mushrooms and ends with, "Tell me my dear friend whether you love mushrooms?"

So without further ado....I bring you Abigail! 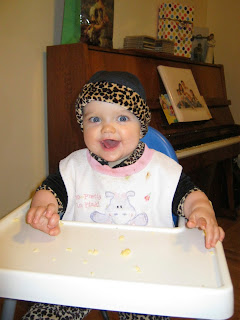 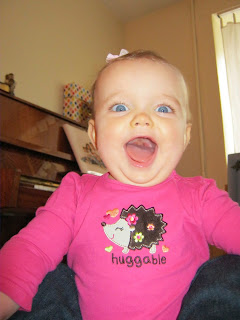 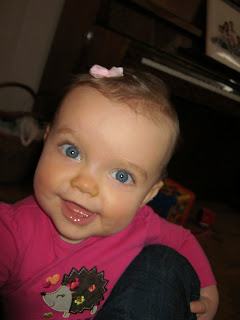 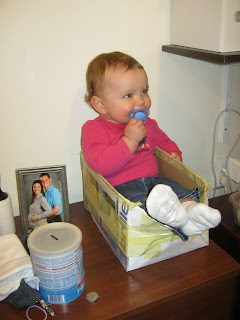 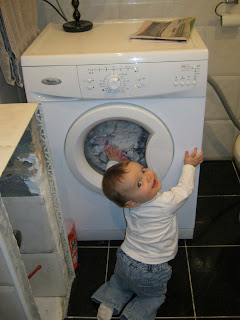 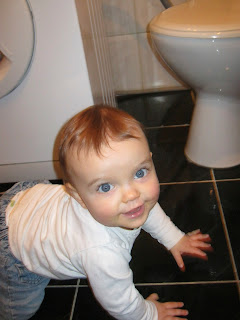 Kelsie Steele
Hey, I’m Kelsie! Thanks so much for stopping by. This blog is a sprinkling of various things from my life--books, travel, family, food-- but my first and greatest love is walking with my Savior, Jesus Christ.